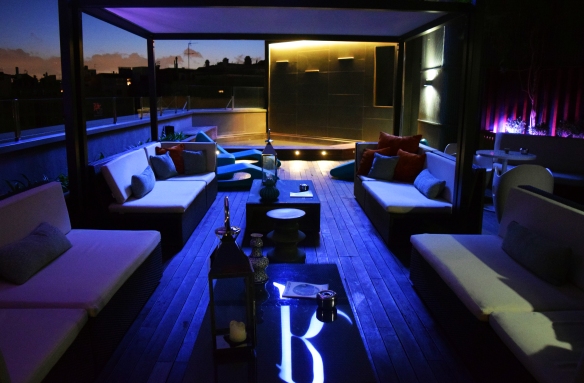 This week’s photo challenge is all about state of mind, so I thought I’d skip way ahead in my travel writing and give you a glimpse of my time in Spain. The Renaissance Barcelona Hotel has a stylish lookout point built into its 8th floor. It’s nice, quiet, and comfortable. If you’ve been walking around the city all day, this is the place to go; you can bring your dinner upstairs, relax on the beds, listen to the chill music (they were playing a remix of Diana Ross’s “Love Hangover” at the time), and get a decent view of downtown. That’s assuming, of course, that you’re a hotel guest; you need a room keycard to access the elevator. A larger version is viewable here.

Hey, folks. Today’s Daily Prompt is all about music. Specifically, the music you had while growing up and how it influenced you. This is going to sound bizarre, but I was raised with an eclectic mix of R & B, soul, pop, disco, rock, easy listening, and show tunes. No, seriously. My parents had wildly different tastes in music – probably not a factor in their divorce when I was two – so I got to hear something new depending on who was watching me. Neither were around much, but they gave me full access to their record and cassette collections. My mother’s vinyl library was small, but it had some of the greats. She used to sing along to the likes of Aretha Franklin, Diana Ross, Mariah Carey, Whitney Houston, Vanessa Williams, and Dionne Warwick. Looking back, it makes a lot of sense; my mother was part of a church choir growing up, so it’s no wonder she loved listening to those powerful voices. I’m pretty sure she considered I Will Survive her personal theme song. She was also an avid Michael Jackson fan, and had at least a couple of Earth, Wind & Fire albums. She also had a great love for more traditional singers like Frank Sinatra, Dean Martin, and Nat King Cole. She had a cassette of oldies that stayed in her car for well over a decade.

I didn’t spend nearly as much time with my father (every other weekend at most) but I could tell he was more a straightforward rock fan. Not the stuff from the 80s onward, but mostly songs from the 60s and 70s. He got me hooked on Elton John, The Beatles, The Eagles, James Taylor, Eric Clapton, Rod Stewart, and several others. I’ve always been kind of curious about learning the guitar, and I think it’s because I listened to Hotel California and Fire And Rain so many times as a kid. He also made sure I listened to classical music as well; I’m pretty sure I was the only sixth grader in my class who knew O Fortuna and Hungarian Rhapsody No. 2 by name. It probably helped that I asked about the Looney Tunes background music countless times…Dad was also a big theater geek, so he had me listen to the entire Phantom of the Opera soundtrack, specifically the one with Sarah Brightman as Christine. He even took me to see the play when I was in the 8th grade. He also had the taped version of the Les Miserables 10th Anniversary Concert, complete with the legendary 17 Valjean encore!

Wow, I’m actually geeking out over all this.

Needless to say, such variety had a huge influence over my musical tastes. Even to this day, I prefer songs with guitars, pianos, or strings. Santana, Hendrix, and Clapton are mainstays on my playlists. The genre doesn’t matter, though; I can rock out to DiDuLa’s Arabica, Seals and Crofts’s Summer Breeze, and Oasis’s Champagne Supernova depending on my mood. A considerable portion of my library is dedicated to older rock bands like Led Zeppelin, Queen, Pink Floyd, and many others; I’ve listened to Kashmir and Under Pressure more times than I’d care to admit. I’ve got a soft spot for somber ballads, too; Andy Duguid’s Don’t Belong, Simply Red’s Home, and Fastball’s Out Of My Head are practically essential for my evening commutes. Wichita Lineman is still the loneliest song I’ve ever heard. Mel Torme’s version of Stardust comes pretty close, though. I wonder if my liking those songs is a reflection of musical taste, or just an emotional state.

Oh, and fun fact: I may have all these songs completely memorized in my head, but I can’t sing them. My voice is too soft. How’s that for irony?