I kicked off May 2016 by doing something a little different: I went on a group hike with Hike It Up SF. If you’ve followed my blog for the last couple of years, you know I’ve hiked about half of the city by now. But I’d never been to Bernal Heights, and I’d always do my adventuring alone. These folks organize awesome urban hikes at the end of every month, and I had just stumbled across their listing on SF Funcheap the night before. I’m not much of a people person, but I was determined to see a new area and meet others who shared at least one interest. Besides, the weather was gorgeous; I wasn’t going to spend such a wonderful spring weekend stuck in the house.

Judging by that photo, I’d say the decision paid off.

Did you know that there’s a canyon in San Francisco? I certainly didn’t. Especially one so close to a BART station. It’s located within the vicinity of Sutro Tower (AKA That Big Pointy Antennae looming over the city’s southern skyline) and hidden behind the hills. The climb itself was nothing crazy – I visited Mount Diablo multiple times as a kid – but I managed to get a little scraped up while taking one of the higher, rocky trails. I brought along my hiking stick just in case (man, was that a conversation-starter on BART!), but I never needed it. The pace wasn’t grueling, though I often let myself fall behind the pack (there were about 30 of us, a relatively small group by some accounts) in order to take more photos. Surprisingly, there were only two or three others that brought DSLRs. The trail was pretty busy even without us; I saw several joggers, a rock climber, and in one memorable instance, a man pushing a large stroller down a hill.

The hike was fraught with twists and turns. At a couple of points, we had to turn around and take another path. We climbed hills, stumbled across abandoned homeless camps, took in the scenery, and eventually emerged at the end of a cul-de-sac in some forgotten nook in the city. While I attempted to keep track of our exact route, I eventually gave up and just followed the group’s lead. I occasionally snapped photos of the street signs to give myself a visual record, but I’m still piecing it together. I do know that we climbed/descended at least three hills after leaving the canyon. We passed Saint Paul’s Catholic Church, the slide near the Esmeralda Stairs, gorgeous houses, and several kids eating ice cream.

Just as exhaustion was starting to pull me under, we reached the hike’s culmination: the peak of Bernal Heights Park. San Francisco spread out before us like a ludicrously detailed miniature. Before this, the highest point I’d visited was Coit Tower. But this was different. I could see Japantown, the Bay Bridge, just a glimmer of the Golden Gate on the distant horizon…All of these places I’d walked and seen before dozens of times, but on a scale unlike any seen. And all because I decided to take a chance and do something a little different with my routine. You’ll see the photo of it soon; I took a lot of shots while I was up there, and I’m still sorting through the best of them.

The trip back down was relatively easy. Much like the neighborhood surrounding Coit Tower, there were narrow stairways built into the hillside. Go down a flight of steps, land on someone’s doorstep, go down more stairs, rinse and repeat until the street reappears. The hike ended at the Wild Side West, where we could finally sit and relax in the shade of the beer garden downstairs. I was apprehensive at first; I don’t drink or party, and crowded places feel claustrophobic to me. I was the only one not drinking or speaking; what could I add to this mix of far more interesting people?

After a view quiet, awkward moments, I sat down at one of the big stone tables, sipped my tea, and just rolled with it. I showed off my photos and talked about some of my more bizarre adventures in the city. I met a young Bulgarian woman currently working in the Bay Area for the next couple of months, a mother with an unbridled passion for the Golden States Warriors, and a published entomologist who may be naming his own spider species in the near future. When it was time to go, the latter offered to split a Lyft back to Glen Park BART. Then we discovered that we were a mere 15 minute walk away from the station, so we decided to seize the spirit of the day and finish things off with a little mini hike along the highway. We parted ways at a burrito shop nearby, and I made the long commute back home. I managed to get home just in time to heat up some leftovers, and collapse into bed.

Not bad way to start the month.

A larger version of this photo is viewable here.

This week’s challenge is all about landscapes, which are some of my favorite things to photograph during my travels. This was especially true for the Bay of Kotor in Montenegro, which is a serious contender for the most peaceful, serene place I’ve ever visited. Geographically speaking, this was the furthest I’d ever been from home. It’s still unspoiled by heavy tourism, but that’s not going to last once word gets out of how beautiful it is. Just look at that water! A larger version is viewable here.

This week’s challenge is all about one love, so I thought I’d skip ahead of my writing and share a photo that best portrays my love of travel. This is the Bay of Kotor, Montenegro. It’s easily one of the most serene and peaceful places I’ve ever visited; its raw beauty hasn’t been spoiled by tourism yet. In geographical terms, this was the furthest I’ve ever been from home (even more so than Hong Kong), and I loved every moment of it. Exploring the world, learning new things and cultures, seeing faraway shores, finding places that are more beautiful than you thought possible… all with the wind and sun at your back. A larger version is viewable here. 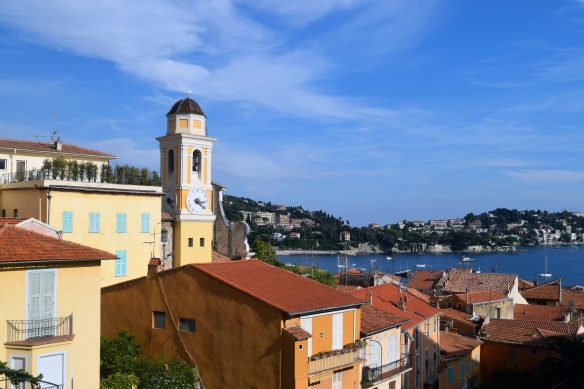 Now that I’ve written a few days’ worth of entries about my latest trip, I think it’s time that actually showed some of it. The first major stop on cruise was Villefranche-sur-Mer, which is part of the French Riviera. After taking a smaller boat to reach land, it’s possible to climb the nearby hill and ride a local bus over to Nice. Along the way up, I came across this view seen from the Saint Elme Passage. A larger version is viewable here.

Originally built in 1896, the Sutro Baths were a large swimming pool complex. It was open until 1966, when it was shut down due to limited finances, and a fire destroyed much of the structure while it was being demolished. The ruins are now part of the surrounding National Park. It’s a neat landmark near the western terminus of San Francisco, just downslope from the historic Cliff House. Larger version is viewable here.

This week’s challenge calls for a muse. You might have noticed I have a thing for the ocean and sunsets. Granted, I’m a nature lover in general, but there’s something alluring about the ocean; it gives you a sense of scale and your location on the Earth. You can watch the sun vanish before your eyes, giving you a greater insight of the astronomy and physics involved. The horizon practically begs you to venture forth and find out what’s out there. The ocean is one Earth’s great remaining mysteries; you can just stand there and wonder what lurks beneath the surface. You can breathe in the salty air, feel the wind your skin, and hear the waves endlessly crashing onto the shore…Yeah, I love it. This is one of many photos I took during my most recent trip. I’ll be posting more throughout the week; though they won’t all be sunsets, they’ll definitely involve oceans. 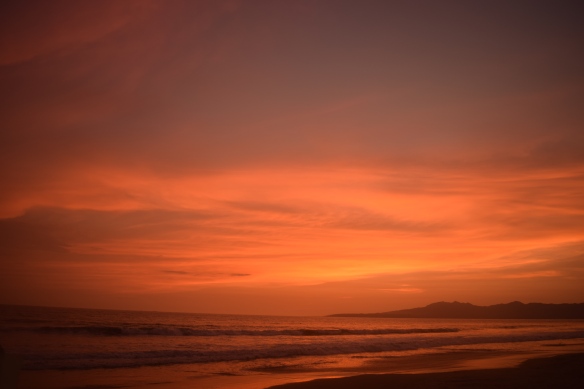 When I was taking sunset photos in Nuevo Vallarta, I had to share a pier with several other sightseers. Once the sun vanished behind the hills in the distances, most people left. However, I stayed an extra half an hour to see how the weather would develop. I was rewarded by one of the most vivid and colorful night skies in recent memory. Large version available here. 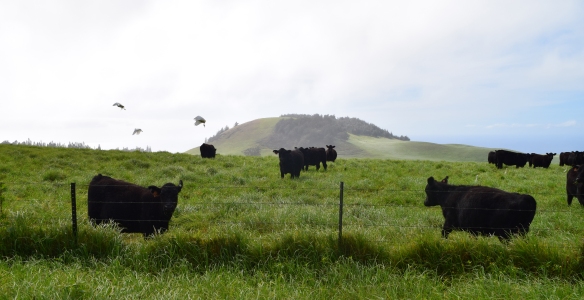 This week’s challenge is all about photos you’ve taken along the way to your destination. I immediately thought of Highway 250 on Hawaii’s Big Island. Most people don’t associate cows and farmland with Hawaii’s tropical paradise, so Kohala’s highlands seem so wonderfully strange.

There are a lot of photos online taken at this exact location. It’s at the base of Coit Tower. I’ve passed it a million times, but I didn’t have a decent camera to capture it until now. The building with the spires is Saints Peter and Paul Church.

Took this en route to Coit Tower last weekend. There are a lot of ways to get up there, but Montgomery Street is the most direct way from Market Street/downtown. Just have to take a lot of stairs and walk through a neighborhood hidden in the hillside…