SciShow explains why your favorite foods are way more complicated than you might think.

Hey, folks. Today’s Daily Prompt is all about teachers. Specifically, the ones who have had a significant impact – good or bad – on your life. This one’s actually kind of tricky; I was on decent terms with all of my instructors, but few of them ever stood out. I’ve always been an overachiever in academic settings – yeah, I was that kid – so teachers focused more on helping the struggling students. I got the (quite wrongful!) impression early on that they didn’t really care about what they were teaching, and were only there for temp work or couldn’t find employment at better schools. Just show up for class, finish the assignment, get the A, and move on. Nothing personal or mind-blowing.

That all changed when I transferred to a university for my upper division coursework. In my first semester, I had a class on Renaissance Literature. I was expecting the instructor to be an bland, cranky, grandmotherly type just like nearly every English teacher I’d had before. This professor, however, was full of energy, enthusiasm, and cracked tons of jokes throughout the lecture. She was so intense and ridiculously over-the-top, it was infectious. I later found out that she had a venti triple-shot Starbucks concoction before showing up every morning. The caffeine made her the life of the party, and it gave a serious boost to her presentation. Some students don’t like that kind of loopy personality (I certainly would’ve tired of it under different circumstances), but no one could deny its effectiveness. The only time it backfired is when she misread the syllabus and assigned the entire Book of the Courtier to be finished in a single overnight reading. It was insane, but we got it done. As an apology, she dropped the final exam from the course. Coincidentally, that extensive reading helped inspire my current world view.

Woe to anyone who underestimated her, though. There was a good reason she was in charge of the department’s graduate program. As goofy as she was in lecturing, she was absolutely ruthless when it came to grading, structuring, and editing. Not doing an assignment in perfect MLA Format was an insta-fail. Don’t craft an argument well enough? Be ready to get called out on it. I pride myself on my writing, but I wouldn’t be nearly as good without her turning my work into a jumble of red marks and annotations. Some of my finest papers were written in her classes. She challenged me to improve, something no other teacher even tried. This is on top of her bringing in extra books, movies, plays, and artifacts she’d collected over the years. She cared enough about what she taught to make it interesting, and spent plenty of one-on-one time with each of her students. She wanted us to be at our best, and nothing less.

Needless to say, that Renaissance Literature class wasn’t the last I saw of her. I ended up taking her courses in Shakespeare, Milton, 19th Century British Literature, and Critical Writing On Drama. I improved with each passing course, eventually becoming one her top students. She gave me her personal copy of the Bedford Companion to Shakespeare, as well as a film version of Hamlet. It eventually culminated on my graduation, as she was the one who shook my hand and nodded as I crossed the stage. That was such a long time ago, but I can remember it so clearly. I miss those strange but oh-so educational times. Maybe someday I’ll get a chance to thank her for what she did…maybe with a Starbucks gift card. 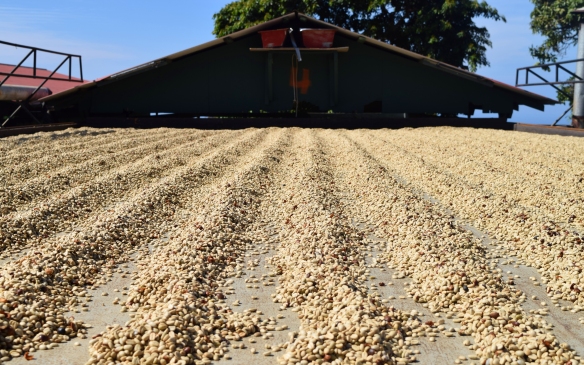 This week’s challenge calls for something new, and fresh coffee beans came to mind. This is what happens after the beans have been picked; they’re put in sacks and hauled over to the processing machinery. Those are the small sacks, too; some of the sacks at Greenwell Farms were as tall as I was!

This week’s challenge calls for something new, and there’s nothing quite like raw coffee beans. You ever wonder where some of your Starbucks and Peet’s Coffee come from? Greenwell Farms on the Big Island has you covered. And I can attest, the island’s fresh brews are way better than anything you can find in the mainland. I normally abstain from coffee, but their Autumn Harvest was ridiculously good!

It’s cold. Not freezing, but it’s getting there. If I return to this street a month from now, it probably will be. San Francisco’s Financial District never changes. Oh sure, the stores change. But the people don’t. It’s the same crowd shifting and flowing down Market Street’s dingy sidewalks. The overbearing smell of McDonald’s breakfasts wafting out a sliding door. A group of guys in jeans and dreadlocks selling rap CDs outside of Walgreens. A hundred people wait at the crosswalk. The pressure is immense; you can get crushed within this mass of flesh and fabric. Eyes on the signs and opportunities, friends and lovers and coworkers chatting. A businessman speaking Spanish into a cell phone, loudly. Two Japanese school kids, busily texting with heads downcast. Hands shoved into coat pockets, scarves hiding visible breaths. I can hear the drum players over by Kearny, their music surging forth on the wind. A man with a microphone singing 80s R&B. A fashionista strutting by in some kind of black blouse/skirt/boots ensemble. She looks beautiful, but impractical. This isn’t the place for a pseudo-catwalk. A young girl stares wonderingly into the entrance of the Ghirardelli shop, desperately hoping her parents will let her get lost amid the mountains of desserts. The request is denied; she is escorted hand-held from the building.

It’s too early for chocolate.

The light is about to change. Drivers make a break for the yellow light, and most of them succeed. Horns blare, deafening and annoying. The engines snarl and sputter, and people are already entering the crosswalk. Idiots, wait for the signal! How many pedestrian casualties happen just within this little chunk of the city? But no one cares; they just have to make it to their destination as quickly as possible. People ignore their mortality until hits them in the face; inevitability can’t be denied. One last straggling driver makes it past the light, but gets stuck in the crosswalk. Dark green SUV, driver with shades and a blue-tooth. She’s sipping her coffee, barely masking the frustration bursting from every immaculate pore. None of us skips a beat; the pedestrians leave the safety of the century-old curb. We surround and pass the SUV like water over a rock; it’s nothing but terrain. The wind picks up between buildings, and I get half a mouthful of my hair. It’s okay, at least it’s not raining yet.

A glance into a Starbucks window reveals a wonderful but slightly sickening setting. Every seat in the place is occupied, mostly students with laptops. We’re just a stone’s throw away from Academy of Art University, after all. Not a single spot for someone to just sit down and take a minute to get out of the cold. Or meet the love of your life, like in countless romantic comedies. It must be sweltering in there. No, stay out. There’s like 20 people in line, and they probably won’t even let you use the restroom unless you buy something. Save your money. Keep walking, buddy, nothing to see here.

The sidewalk on the corner of Market and 4th turns from gray to red. I’m not sure if it’s actual brick, or just painted. It’s a nice aesthetic choice, considering it’s in front of the Old Navy flagship store. Dozens of people flock through its multiple double doors, seeking savings on bland but comfortable clothing. I’m not even inside, and I can hear the pop music blaring out of the speakers. The employees must despise it. Assuming they haven’t gone deaf yet, of course. A row of flags mounted on the front facade dance and flap with the breeze, mesmerizing passersby like a siren’s song. Mannequins pose dramatically as they sell the latest (at least in the current cycle) styles. A young, smiling greeter is placed strategically at the center of the entrance, handing out information on the latest sale. Our eyes and polite smiles meet for a second, but no more.

It’s an unspoken understanding that this particular corner is a place to visit. It’s partly due to being the location of a popular store, but it’s more than that. It’s like a market condensed into only a few dozen square feet. Vendors sell cheap trinkets and hats next to the curb. Fake jewelry, key chains, knitted Pokemon knock-offs. A guy in a deliberately tacky red suit is selling balloon animals; a schoolkid walks away with a latex sword. BART and MUNI subway riders arise from the depths close by. A line of people, mostly tourists and college kids, shiver as they wait for the oncoming trolley. A homeless man – one of hundreds just in this area – leans against the exterior of the building, bearing only a torn, grimy brown sweatshirt and faded jeans. A cardboard sign and a 7-11 cup in hand. Eyes downcast, arms raised in supplication. No one notices. Even the young kids out on winter break just sidestep him. His odor is masked by the sheer stench of grayish smoke puffing and billowing out of a sewer grate next to the crosswalk. I walk too close to a couple of girls in matching blue t-shirts, and they give me a pamphlet offering personality tests. I nod politely and pocket it.

I’ve been this exact moment so many times, it’s maddening.

But here’s something I wasn’t expecting: the Buddhist Monk! No, I’m not making this up; he’s one of the many, many wanderers unique to this part of the city. Tall, saffron robe, sandals, shaved head, attentive eyes, early 30s. Must be freezing. Reminds me of my visit to Wat Chalong Temple in 2012, though this setting is far less dignified. He’s walking slowly up Market Street, nodding eagerly and trying to interact with everyone. Of course, he’s being ignored; people either walk around or dismiss him with a hand wave. But I recognize this guy. He gave me prayer beads and a shiny Guanyin decal a month ago. He even showed me pictures of his temple! I want to thank him for out last encounter. I want to say how awesome I think he is, how much I appreciate him sharing just a tiny fraction of his world with those around them. I want him to know that at least one person in this seemingly endless expanse of humanity, there is at least one person who acknowledges him as an individual. I walk up to him and grin.

Eye contact mired by confusion. He doesn’t recognize me. We don’t speak the same languages. Gah, if only I had brought the prayer beads with me! Maybe the next time we meet…But not now, not this failed attempt. People pass us by without a glance; we’re holding up the flow. We hold each others’ gazes for a few awkward seconds, and I try to salvage the exchange with a picture. He smiles kindly and responds: